Name: Tim Reeves
Email Address: timreeves7@gmail.com
Best Way to Contact You: Discord: TimR7
eWrestling Experience: SHOOT Project (2011-Present). Sin City Champion x2, Villain of the Year winner 2013, Feud of the Year Nominee 2020 (w/Azraith DeMitri). OWC (2007-2010). United America Champion x3, Tag Team Champion x2 (w/Gabriel Knight). Prior to 2007 I bounced around, never really finding my footing until the Mephisto character was created. I started this whole efedding thing in an old AOL email real wrestler fed a long time ago.
How did you find DEFIANCE? SHOOT Project discord
DEFIANCE is an angle fed that asks its roster members to write matches (generally with a feud partner) during each arc they’re involved in. Is this something you’re willing to do? Yes

This is the most important part of your application: please sell us on you as a handler. How you do that is up to you. Link us to an old segment. Write a new one. Link to a match you wrote. We want to see what you’d bring to the table as a member of DEFIANCE.

Most Recent Segments (both from the same show): 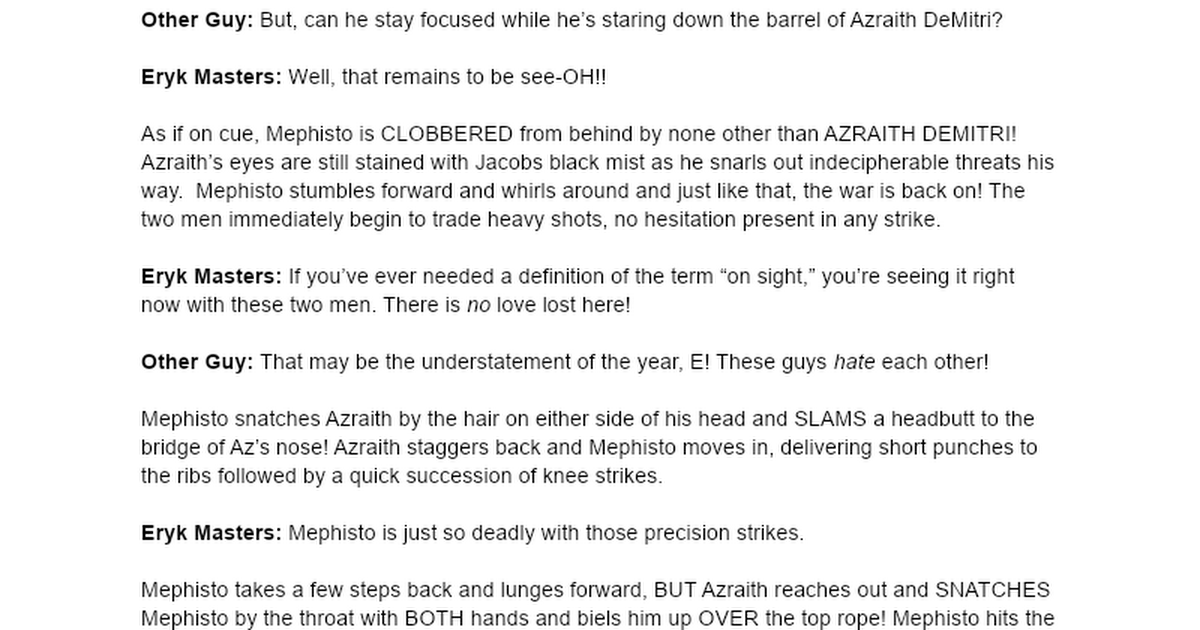 Mephisto stands in the center of the ring, arms held out wide and head tilted back, soaking in the jeers of the sold out Epicenter crowd. Eryk Masters: The comeback tour continues for Jacob Mephisto as he picks up his first ever win in a Master of the Mat tournament. Other Guy: But, can he stay... 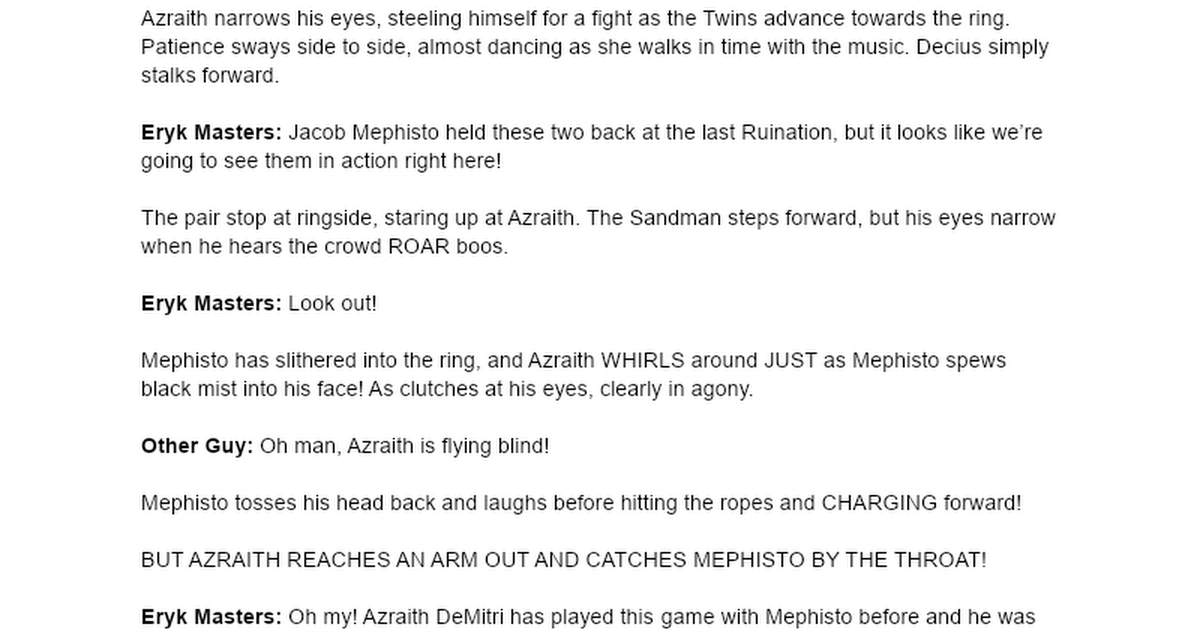 Azraith stands tall after an earned victory, his arm raised by the referee. Eryk Masters: Azraith DeMitri is moving on in the tournament! A hard fought victory for sure for the Sandman! His music is suddenly interrupted by the all too familiar… TIIIIIIIMEEEE… IS ON MY SIIIIIIDEEE… YES IT IS! ...

FYI, it is highly likely that a few roster members will critique your moveset. Please don't be offended; we take that seriously here. We don't want a moveset full of finishers or a finisher so ludicrously overelaborate that it couldn't be done in real life. We also check to make sure your finisher(s) and theme song aren't currently being used. It's first come first serve when it comes to those. If you want to get ahead of the game on the finisher and theme song front, take a look at our roster page: http://defiancewrestling.com/roster

And if you're one of those handlers who hates doing movesets, just say so and staff/the roster will help you.

Theme Music: Time is On My Side by Wilson Pickett

Gimmick: Mephisto was patterned after Jake Roberts in his “Trust Me” era. He’s evolved a lot since then. He’s a master manipulator. The current iteration of Mephisto borrows from the old school Kevin Sullivan Army of Darkness stable. He’s a Manson-like cult leader in the vein of Otis B Driftwood, but heavily rooted in professional wrestling. He has a newly acquired “family” that he’s brought to pro wrestling.

Wrestling Style: Technical and Sudden. Mephisto is methodical in his approach, but he isn’t slow. He’ll take the time to work limbs and inflict punishment. When he strikes, it’s sudden and quick. Most of his move set is either based around working body parts or sudden strikes and suplex-style moves. His signatures are design with a methodical setup and a sudden finish.

Three Weaknesses: Obsesses over opponents, Vulnerable to high-flying and speed based offense, Underestimates opponent's mental capacity (thinks he's always the smartest one in the room)

1 Finishing Move: No Quarter - high-angle texas cloverleaf (done in the style of the old-school liontamer)

Yes, absolutely. Solid writer from SHOOT and a good OOC presence. Will you also be bringing the Twins in or just Jacob for now?
T

The Twins will probably make an appearance as well!

I vote yes -- just be aware there are sorta similar characters active in DEF at the moment. The consensus is that you'll set yourself apart so I say come on in.

I vote yes based on Lindz's vouching for you being good people. To others' points, there are some other characters in the "master at mind games" archetype but I'm sure this character can be presented in a way that feels different.